Orvieto – Between History and Nature 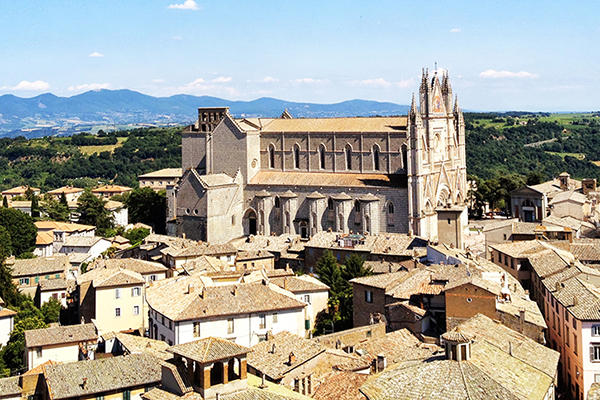 Orvieto is an ancient city perched on a cliff of tufa rock, with many riches such as medieval and renaissance palaces, churches, Etruscan necropolis and the remains of Etruscan origin set out in the archaeological and civic museums. Orvieto boasts unique architecture like its one of a kind Duomo and the St. Patrick’s Well. The city offers many attractions including the Pozzo della Cava, the Torre del Moro, the Palazzo del Capitano del Popolo and the city’s underground (Orvieto Underground). Orvieto is also home to many events and music festivals. Among the major annual events is the feast of Corpus Christi with the historical procession, Umbria Jazz Winter, Orvieto con Gusto, Orvieto Food Festival and Umbria Folk Festival. For more information about the city of Orvieto visit: www.orvietoviva.com

Nearby you can reach Bolsena (14 km from Orvieto) following the SS Cassia towards Viterbo. The Bolsena Lake, one of the cleanest in Europe. Of volcanic origin, the Bolsena lake is dotted along its entire perimeter with residential areas, restaurants and beaches.

Bolsena town of Etruscan origin, is linked to Orvieto from the famous “Miracle of Bolsena.” This year marks the 750th anniversary and establishes an Extraordinary Jubilee Eucharist. In the country, a visit is a must at the beautiful basilica of Santa Cristina and the Monaldeschi Castle, current home of the territory museum. From Bolsena it is worth visiting the charming village of Capodimonte, take advantage of the opportunity to take an impressive boat tour of the lake and two Islands, Isle Bisentina and Martana Island. Continuing along the perimeter of the lake there are very nice other towns such as San Lorenzo Nuovo and Martha. In the direction of Viterbo instead, it is worth stopping in Montefiascone with the beautiful fortress of the Popes and the Church of Santa Margherita.

Civita di Bagnoregio (12 km from Orvieto) towards the town of Bagnoregio, (Viterbo direction), a village nearly uninhabited but rich in tourist activities, it is connected to the rest of the world by a long and foot bridge. You will enjoy the picturesque view of the Valley of the Badlands and the nearby Natural Park of Lubriano: a path in the countryside for relaxing walks in close contact with nature. Torre Alfina: another village that as Civita was ranked among the most beautiful in Italy. The entire town is surrounded by green areas, dominated by the magnificent castle Monaldeschi. Near the castle is a “monumental” forest with huge rocks and tall trees, and embedded in this nature is the Gothic mausoleum of the noble Marquis E. Cahen to whom we owe the construction of the spectacular art nouveau villa ( Villa La Selva or Villa Cahen) perched in the woods of the the village of Allerona.

Todi: (about a half hour drive from Orvieto), this beautiful Umbrian town can be reached passing through the area of the Corbara Lake and the Tiber River Park, a protected environment very scenic and picturesque ideal for lovers sport fishing and hiking or mountain bikes. In the town of Todi is the town center, with the beautiful Piazza del Popolo, the Duomo, Palazzo dei Priori, and Roman cisterns. Just outside the city, is the majestic sanctuary of Consolation. Todi is also located near the small town of Monte Castello di Vibio, reported among the most beautiful towns in Umbria, where he established the original “little theater” which, as the name suggests, has the distinction of being the smallest theater in the world.